Towards a unified mechanistic model of oceanic island biogeography

MacArthur and Wilson’s Equilibrium Theory of Island Biogeography (ETIB) has long been a keystone in island biology and conservation theory. The ETIB proposes that island diversity depends upon rates of immigration and extinction, determined by isolation from source populations and island area. Most major ecological theories, including the ETIB, focus chiefly on the static long-term steady state of a community, failing to incorporate space explicitly or the dynamic nature of biodiversity or the geographical milieu. Thus, a central goal in biodiversity research is to provide a dynamic framework that incorporates the fluctuations of the milieu with the evolution of the organisms that depend on that milieu. Recently, the General Dynamic Model (GDM) has been introduced, according to which the carrying capacity of oceanic islands, and hence their biodiversity, displays a predictable humped trend over time. 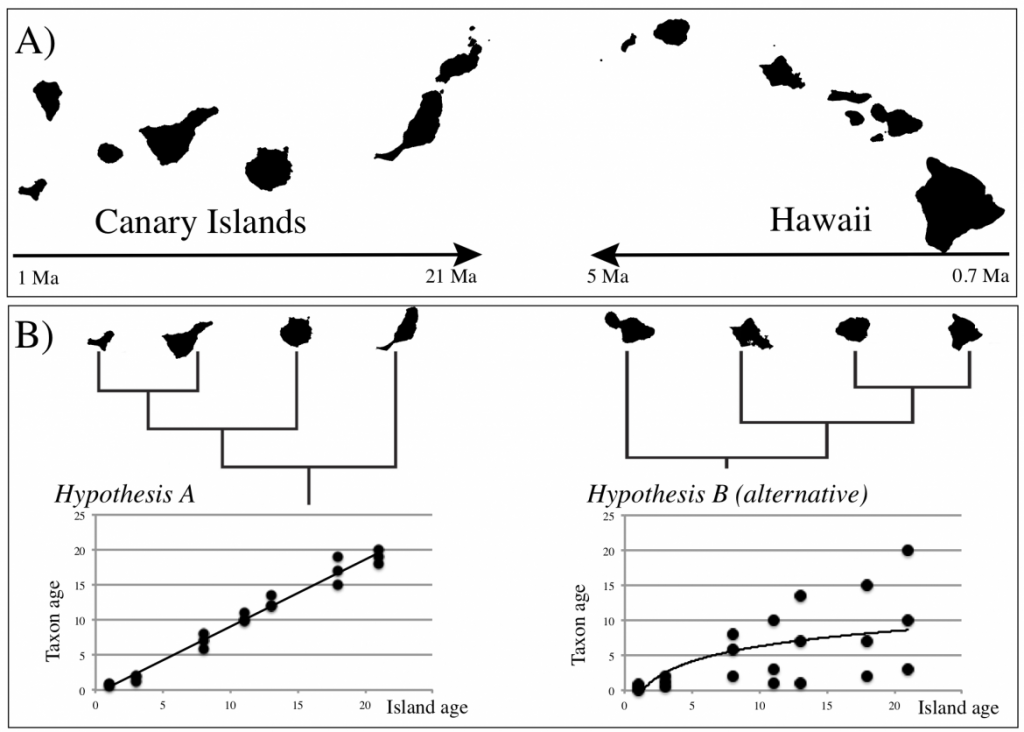 The model is of broad ecological relevance and importance because consistent patterns of spatial turnover and abundance, such as the species-area relationship. For example, there is much interest in the importance of time and scale-dependence on the relationships observed among species number, abundance, with area. UNISLAND contributes to this general ecological debate by explicitly taking into account changes in species abundances through time to explain ecological patterns.

By using novel and cutting-edge approaches, involving comparative phylogenetics, community-level distribution modelling and coalescent-based genomic demographic analysis, UNISLAND brings together the singularities of the ETIB, GDM and more novel glacial models to advance a unified mechanistic model of oceanic island biogeography. This model integrates testable genetic and demographic expectations, thus extending the model relevance to conservation policy by providing information on species and ecosystem extinction risk. The central geographical focus of UNISLAND is the biodiversity hotspots of the Hawaiian and Canary Island archipelagos (Fig. 1A), with a taxonomic focus that encompasses their hyper-diversified lineages of angiosperms and arthropods.

The specific objectives (Obj.) of UNISLAND are:

Obj.1: Investigate spatiotemporal patterns of biodiversity across oceanic archipelagos, by testing the prediction that island age and species age are positively correlated (Hypothesis A, Fig. 1B) against the alternative model where variation in species age increases with island age (Hypothesis B). By applying novel phylogenetic meta-analyses, UNISLAND sheds light on the tempo, timing and underlying mechanisms for the creation and loss of diversity during island ontogeny.

Obj. 2: Improve the knowledge of the distribution in space and time of zonal ecosystems in Hawaii and the Canary Islands by means of community-level distribution modelling of their past, present and future potential distributions.

Within the 11.5 month life of the project, the emphasis was on the first of the two training‐through‐research goals ‐ namely the development of a customized pipeline that enable to extract phylogenetic data for any organism included in international repositories such a GenBank, and the development of a data base with plant species distributions and fine-spatial scale macroclimatic layers in order to be able to perform macroclimatic-based community modelling. During this period, realized there were important conceptual problems regarding two key concepts in island evolution and biogeography, which are closely linked to our first goal that are: anagenesis and cladogenesis. This was the fundamental reason that motivated us to publish a mini-review in Trends in Ecology and Evolution (and see Fig. 2). This has been followed by an additional letter to respond to a critical article.

During this period, I had the opportunity to present the conceptual idea and preliminary results of UNISLAND at the 7th International Conference on Environmental Future, entitled “Humans and Island Environments”, which was held from April 16-20th 2018 at the Hawaiian International Conference Center in Honolulu. In conclusion, my new position, as a tenure-track professor through a Ramón y Cajal Fellowship funded by the Spanish government at the University of La Laguna (specifically the Department of Botany, Ecology and Plant Physiology) will provide me a unique opportunity to ensure that the obtained data and results obtained so far will be fully exploited in the context of the aims of UNISLAND.

STAY tune to check out new scientific releases from UNISLAND as they happen!!